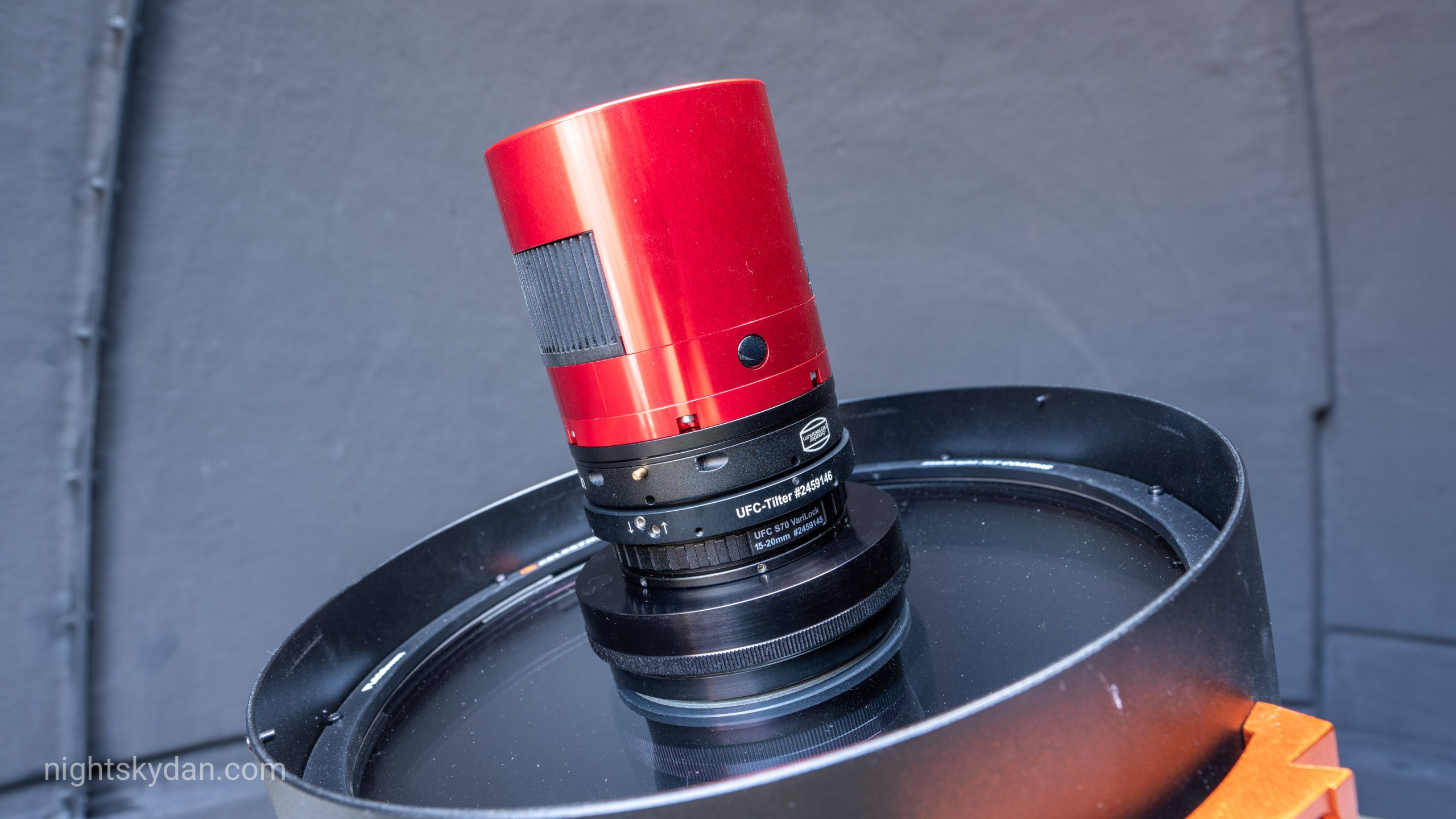 This is a follow-up to a post I wrote a couple of years ago.

I recently upgraded to a full-frame ZWO ASI6200MC Pro camera, and have altered the adapters I use when connecting this camera to my RASA 11″. This post will detail the adapters I am now using.

First, to try and eliminate as much vignetting on this full-frame camera as possible, I use the screw-in Celestron Light Pollution Imaging Filter for the RASA 11″. I also still use the Baader UFC system, as the interior of these adapters is wide enough to ensure the light path isn’t obscured. Also, if I ever want to include other filters I can do so by using the Baader UFC filter slider.

However, there is a problem that occurs when attempting to use the Baader UFC RASA adapter with the Celestron Light Pollution Filter installed. As shown in the photo below, the top edge of the Celestron light pollution filter sits a couple of millimetres above the front tilt plate of the RASA. This means the Baader UFC RASA adapter is no longer able to lay flush on the tilt plate, as it sits on the top edge of the light pollution filter instead.

To enable the reliable use of this filter I ordered a custom RASA 11″ to Baader UFC adapter from PreciseParts that would provide space for the light pollution filter, and enable me to continue using the Baader UFC system:

The custom PreciseParts adapter doesn’t use the Celestron RASA clamp ring, and instead screws straight on to the front of the RASA. I ordered the adapter with an effective length of 12mm – I could have ordered it in a longer length, but I wanted to allow for any future UFC adapters I may install, such as the new Baader UFC Tilter detailed further on in this post.

When installed on the RASA, you can see the adapter has plenty of space within for the Celestron Light Pollution Filter:

With this type of custom adapter installed, it’s important to note it does obscure the collimation screws on the front of the RASA (which I’ve never adjusted, or wanted to adjust!), but Baader recently released a new tilt adapter for the UFC system which I went ahead and ordered. This allows for minor adjustments to the spacing and tilt without having to use the collimation screws on the RASA or the tilt screws on the camera (which are inaccessible when the camera is installed anyway). Here is the UFC Tilter:

The UFC Tilter consists of an outer and inner ring. The tilt of the inner ring can be adjusted (up to 1° of tilt) by using three pairs of push and pull screws located around the edge of the outer ring (shown below). The spacing of this adapter varies from 9.75mm to 10.50mm, depending on the extent of the tilt adjustment.

The inner ring is held in place by three pins that protrude from the outer ring, and this ensures it doesn’t come apart when adjusting the tilt! One of the pins is visible in this photo:

Once installed, I adjust the rotation of the camera so the bottom two corners of the sensor roughly line up with the positions of two of the push/pull screws on the UFC Tilter. I do this by performing a one-off adjustment of the angle of the Baader UFC Filter Slider Base, which sits on top of the UFC Tilter.

This combination of adapters provides a reasonably wide and unobstructed view to the full-frame camera sensor, as shown below.

With the cables and cable router installed, the setup looks like this:

To achieve the required back-focus distance of 72.8mm, the configuration and lengths of the adapters are listed below:

When you are calculating the total depth, remember that the filters themselves add a small amount to the total back-focus distance. The general rule of thumb is to add a third of the filter depth (the glass thickness) to the back-focus:

Taking all the above measurements into account, the total comes to the required 72.8mm.

I hope this post was useful. Please let me know in the comments below if you have any feedback or questions!