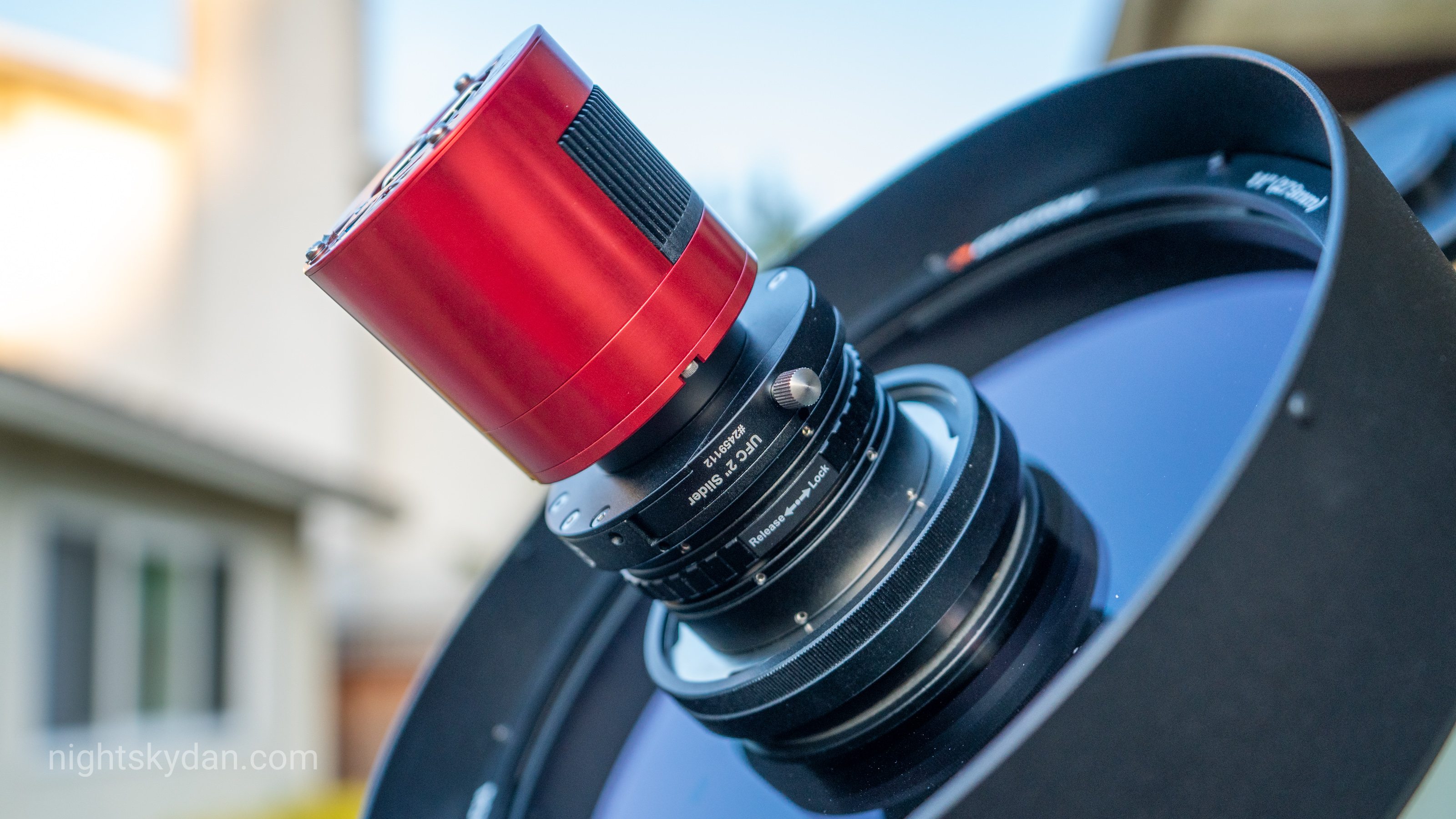 Updated September 2021: If you are using a full-frame ZWO camera, please see this separate post.

With a dedicated astrograph like the Celestron RASA, the camera is mounted to the front of the telescope. Imaging at such fast speeds (f/2.2 with the RASA 11″) requires the camera be positioned at the optimal back-focus distance, otherwise the stars won’t be consistently focused across the entire image. In this post I’ll show how I’ve connected my ASI294MC and ASI1600MM-C cameras to a Celestron RASA 11″.

I use two different astrophotography cameras – a ZWO ASI294MC Pro (a cooled, one-shot-color camera) and a ZWO ASI1600MM-C (a cooled, mono camera). Both of these cameras have a back-focus distance of 6.5mm, or 17.5mm with the included T2 extender ring.

I decided to use the Baader UFC (Universal Filter Changer) system – a series of different sized telescope and camera adapters, plus extensions, that can be combined together and attached to a Baader filter slider base. The filter slider itself features a small magnet, so when you insert it in to the slider base, it stays in place.

Even if you image with a one-shot-color camera, it’s important to use some kind of filter as most dedicated astrophotography cameras don’t block UV/IR rays, which can bloat stars and adversely affect your images. If you live in a heavily light polluted area, you may choose to use a filter that reduces the effects of light pollution – when imaging with the ASI294MC Pro I normally use an Optolong L-Pro filter, then narrowband filters when using the ASI1600MM-C. These filters block UV/IR wavelengths.

In order to achieve the correct back-focus distance of 72.8mm, I ordered the following adapters for my RASA 11″. Each extension features a small dovetail bar along the edge, and comes with screws to attach them together. I found this is a solid design, that clamps each extension together well without introducing tilt. I’ve listed the total depth of each part of the chain, along with the part numbers, and they’re listed in order going from the telescope to the camera:

When you are calculating the total depth, remember that the filters themselves add a small amount to the total back-focus distance. The general rule of thumb is to add a third of the filter depth (the glass thickness) to the back-focus. I use 2mm thick filters:

Taking all the above measurements in to account, the total comes to the required 72.8mm.

You could do this a cheaper way by just positioning the filter slider base right on top of the RASA telescope adapter, then using various T2 rings/extensions to attach from that to the camera, however this would introduce more vignetting, as the filter is located much further away from the camera sensor.

Also, rather than buying the three separate 5mm, 15mm and 15-20mm extensions listed above, you could go with the one-piece Baader 40mm extension and find a T2 ring that is ~7.64mm in depth (assumes your filter depth is 2mm, which adds 0.66mm back-focus), to replace the 11mm T2 ring that comes with the ZWO camera.

Ultimately, I went with the adapters listed above because I wanted something that was precise – the Baader adapters are high quality, and the precision appears good, and I can set the exact depth I want by using the adjustable 15-20mm extension piece, and alter it further if the focus isn’t consistent across the field of view. If I ever use filters of a different thickness, I can also easily tweak this depth if needed.

This setup allowed me to position the filter slider close to the camera, and if I decide to ever upgrade my camera to a larger sensor, or use different thickness filters, I shouldn’t have to change much with my setup.

I hope the above helps. Let me know in the comments below if you have any feedback or questions!