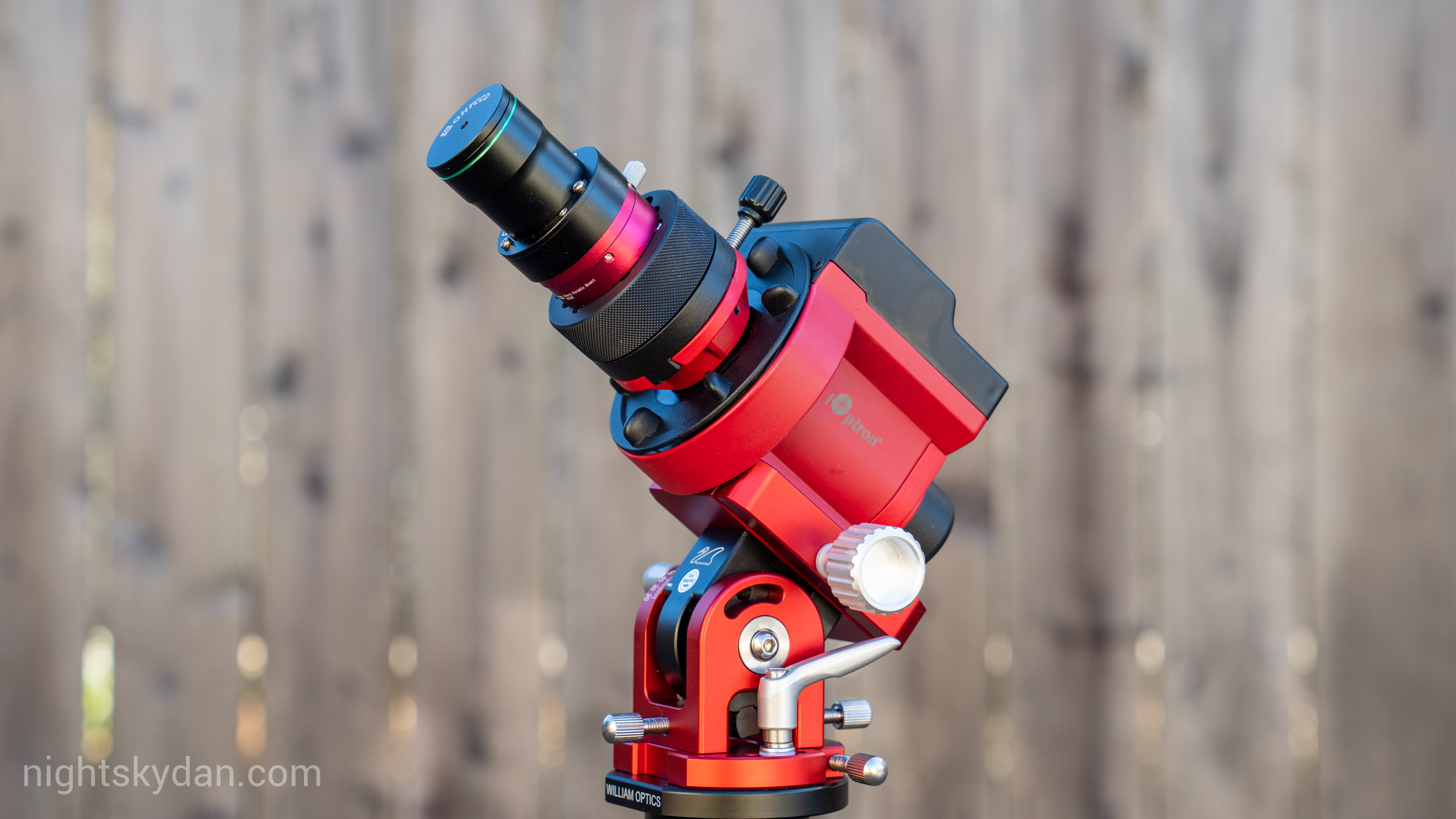 If you use the SkyGuider Pro portable star tracker from iOptron, you probably know it can be a little difficult and uncomfortable to polar align by using the included polar scope, as it ideally requires either a tall tripod in order to see through the polar finder comfortably, or you have to crouch down to look through it. You also need to be careful not to knock the mount or tripod as you approach it to look through the polar scope, otherwise you can ruin your polar alignment!

Doing a rough polar alignment just by pointing in the general direction of north (or south for the southern hemisphere) can suffice for wide angle lenses, but if you want to get a more accurate alignment and shoot much longer exposures and use longer lenses, you can more comfortably and accurately polar align the SkyGuider Pro by using an electronic polar scope instead of the built-in polar scope.

As I already own a QHY PoleMaster, I wanted to find a way to mount it to the SkyGuider Pro. This post will show how to reliably attach the PoleMaster, and I’ll capture some test images to see whether it improves the ability to shoot long exposures.

Attaching the PoleMaster to the SkyGuider Pro

As you need to align the RA axis when doing a polar alignment, it was important that I find a way to attach the PoleMaster flat on to the SkyGuider Pro’s RA axis. Here is the SkyGuider Pro unit, shown mounted on the upgraded William Optics vixen mount:

QHY doesn’t produce a specific adapter for mounting the PoleMaster to the SkyGuider Pro, but they do offer a universal adapter that comes with a 1/4″ threaded hole for adapting to various mounts:

In order to use this universal adapter, I started off by attaching the camera mounting block that’s included with the SkyGuider Pro. This mounting block is fitted with a 3/8″ bolt:

You can find other adapter plates on Amazon or from camera stores. The important thing to bear in mind is you’ll want a fairly deep adapter plate, so that it sits flush with the camera mounting plate on the SkyGuider Pro when fully screwed on (the 3/8″ bolt is 1cm in length). Here is the PoleMaster universal adapter screwed on to the 3/8″ to 1/4″ mounting plate:

And finally, with everything attached:

The important question is: does using the PoleMaster allow me to take long exposures without star trails?

For the following cropped images, I used my Sony mirrorless camera and a fairly heavy Sony 70-200mm f/2.8 GM lens pointed up towards the zenith, first set at 135mm, then at 200mm. I captured a series of exposures ranging from 3 minutes to 5 minutes, to see how it performed. Below are the resulting images.

A couple of the 200mm test shots that I didn’t upload showed some very minor trailing (the one above is almost perfect), but these weren’t evident on every shot, so this doesn’t appear to be a polar alignment issue, but most likely a tracking issue which may be resolved by using a mini guidescope to make minor corrections on the RA axis.

Overall I’m pleased with the performance of the SkyGuider Pro. I’ve owned it for about a year, using it mostly for wide field imaging with my Sony mirrorless camera, but I intend to use it more with a ZWO ASI294MC camera and Rokinon 24mm and 135mm prime lenses as a portable astro rig when traveling to dark sky locations.

I’ll be sharing a post or two on my portable astro rig setup in the near future. Thanks for reading, and clear skies!