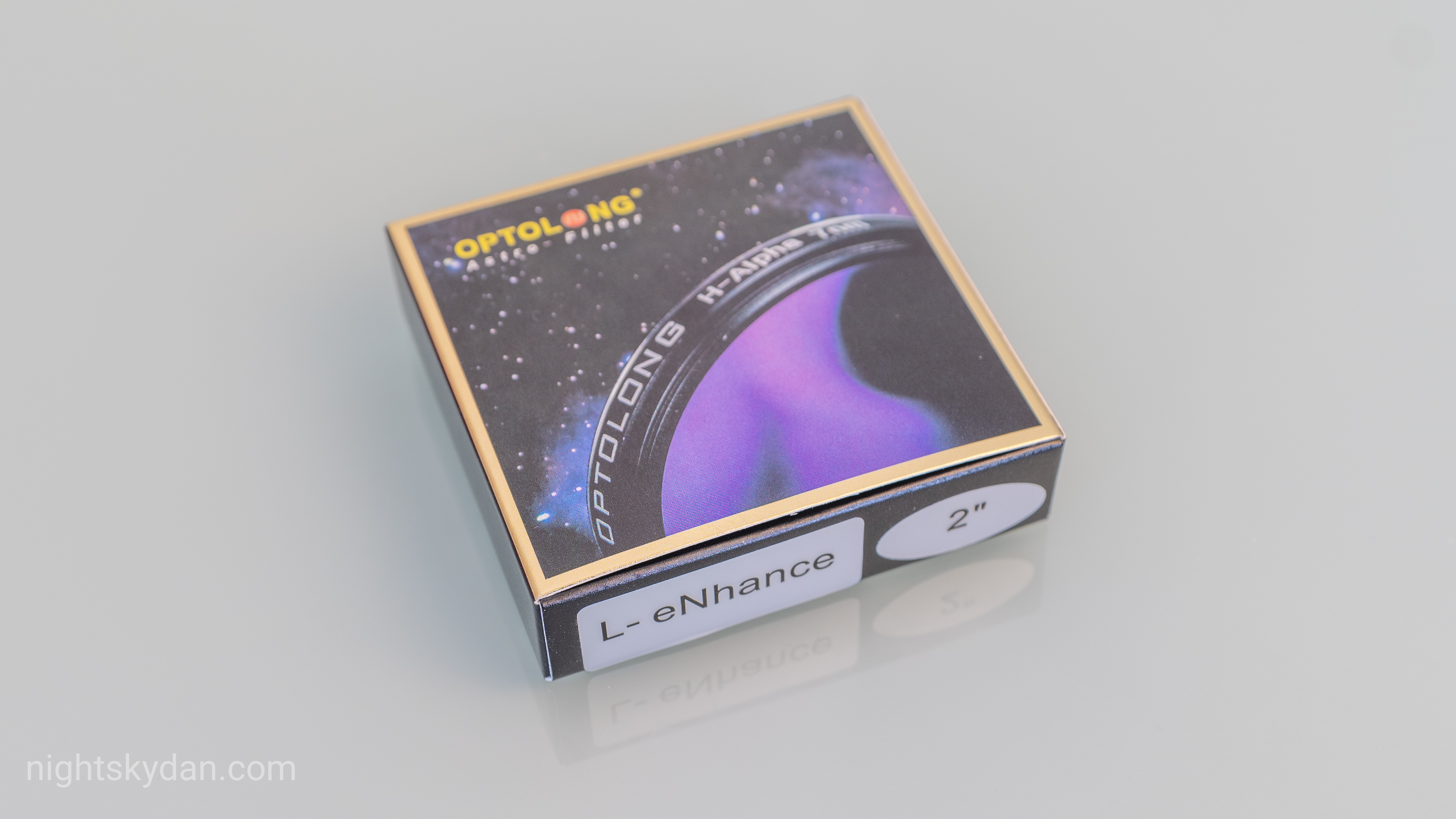 I took delivery of an interesting filter this past weekend – the newly released L-eNhance dual-band pass filter by Optolong, which I pre-ordered a few weeks prior in 2″ mounted format. In this post, I’ll share some details of this new filter, show some comparison shots between the L-eNhance and L-Pro filters, and give my verdict.

As I use a one-shot-color camera with my Celestron RASA 11″ scope for deep sky imaging, I have been looking for a dual-band pass filter that would filter out most of the wavelengths apart from Hα and OIII. The benefit of this being I wouldn’t have to manually change filters during an imaging session – instead, all frames are captured with the one filter using a color camera.

Having been pleased with my L-Pro broadband light pollution filter from Optolong (you can see some sample images on my Astro Images page), I decided to order their new L-eNhance filter and give it a try.

Most narrowband filters are designed to let in one particular wavelength of light, such as Hα, OIII or SII.

The L-eNhance filter is a dual-band pass narrowband filter that blocks most wavelengths apart from the narrow bands of Hα and OIII (plus Hβ), making it most suitable for use with one-shot-color cameras when imaging emission nebulae.

According to a post on the Cloudy Nights forum, the bandwidth/FWHM for Hα is 10nm and OIII is 24nm. This should (in theory) make it ideally suited to a fast imaging system like my Celestron RASA 11″ at f/2.2, or with a Starizona HyperStar setup. If the bands are too narrow, this can cause issues when imaging with a very fast scope.

I currently use my RASA with a ZWO ASI294MC Pro camera and the L-Pro filter from Optolong. Imaging under the heavily light polluted night sky of the San Francisco Bay Area (Bortle class 8 in my location, according to Clear Outside), the L-Pro filter, combined with the powerful processing capabilities in PixInsight, has helped me capture various deep sky objects such as galaxies and nebulae. So I’m hoping the L-eNhance filter will further boost the contrast and detail of nebulae in my images.

I use the Universal Filter Changer (UFC) system by Baader, so I’ve mounted the L-eNhance filter in to the 2″ slider for this test.

I’ll be using the ZWO ASI294MC Pro – a one-shot-color camera – mounted to the front of a Celestron RASA 11″. The filter slider is positioned close to the camera, to minimize vignetting.

With this setup I don’t tend to bother using flat frames when I’ve used the 2″ L-Pro filter – there’s hardly any vignetting, and dust specks haven’t caused problems when imaging at f/2.2.

When stacking my data, I just use 100 dark frames and do away with any bias or flat frames (the short bias frames aren’t particularly good or useful with this camera apparently). Any odd gradients in my images tend to come from the effects of heavy light pollution, which flat frames won’t help fix, so I just use PixInsight to fix the background gradients in editing.

For this test, I’ll be imaging the Western Veil Nebula (NGC 6960). I captured some data of this nebula a few weeks ago using the L-Pro filter during a new moon, so I’ll compare that L-Pro data with L-eNhance data captured on June 17th (full moon). This may not be a fair comparison, due to the large amount of moonlight, but it will be interesting to see how this filter copes under a full moon.

I’ll be using Sequence Generator Pro to capture 40 x 60-second frames at unity gain, with the camera temperature set to -15°C. PHD2 will be used for guiding and dithering between each frame.

After stacking I’ll make some basic edits using PixInsight – to remove background gradients, correct the color balance, and remove the green color cast, plus an auto-stretch. Specifically, I’ll perform the following after stacking: 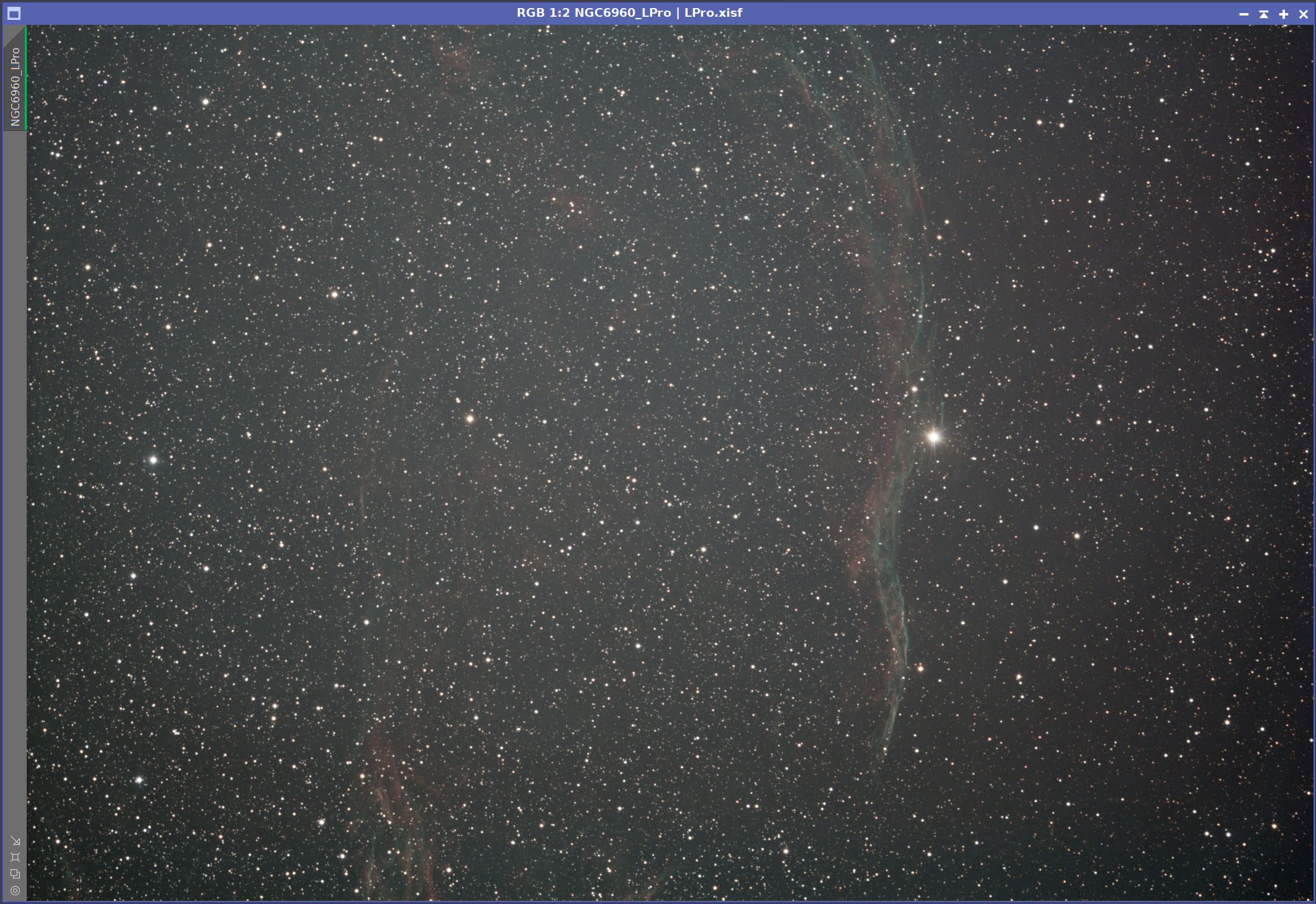 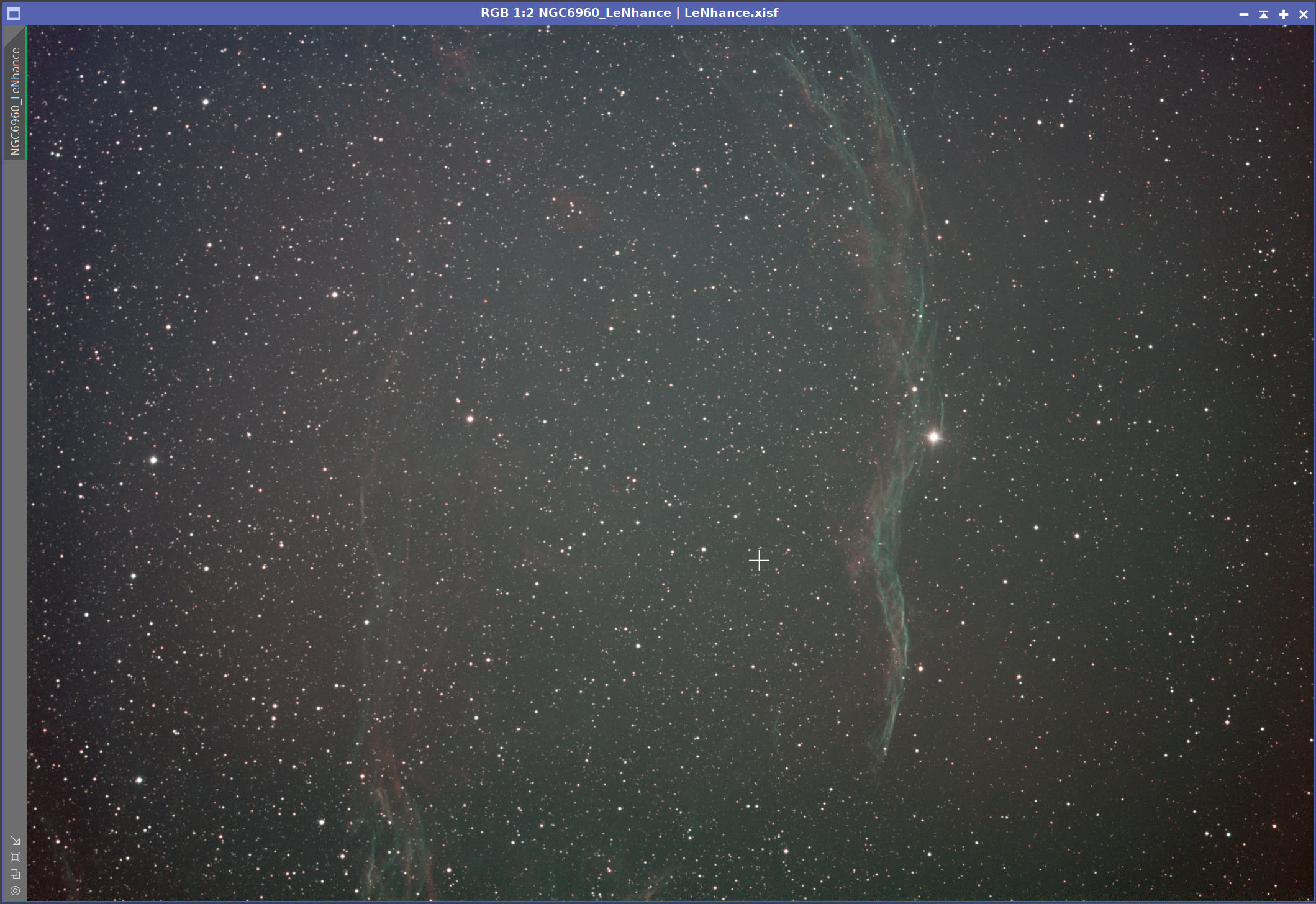 Immediately, I notice a few things in the auto-stretched versions:

Next, I’ve performed a DynamicBackgroundExtraction on both versions, followed by an auto-stretch (unlinked channels): 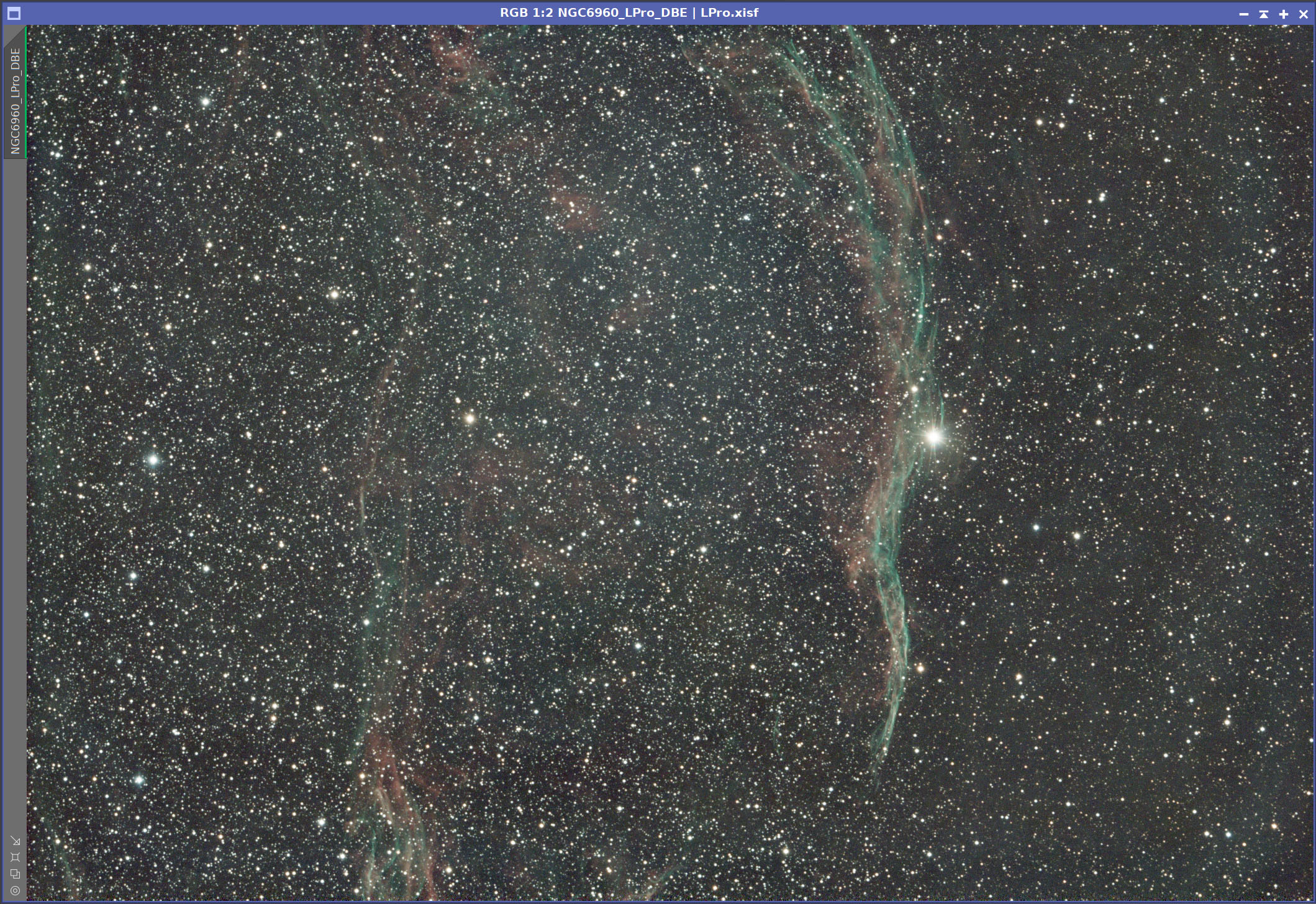 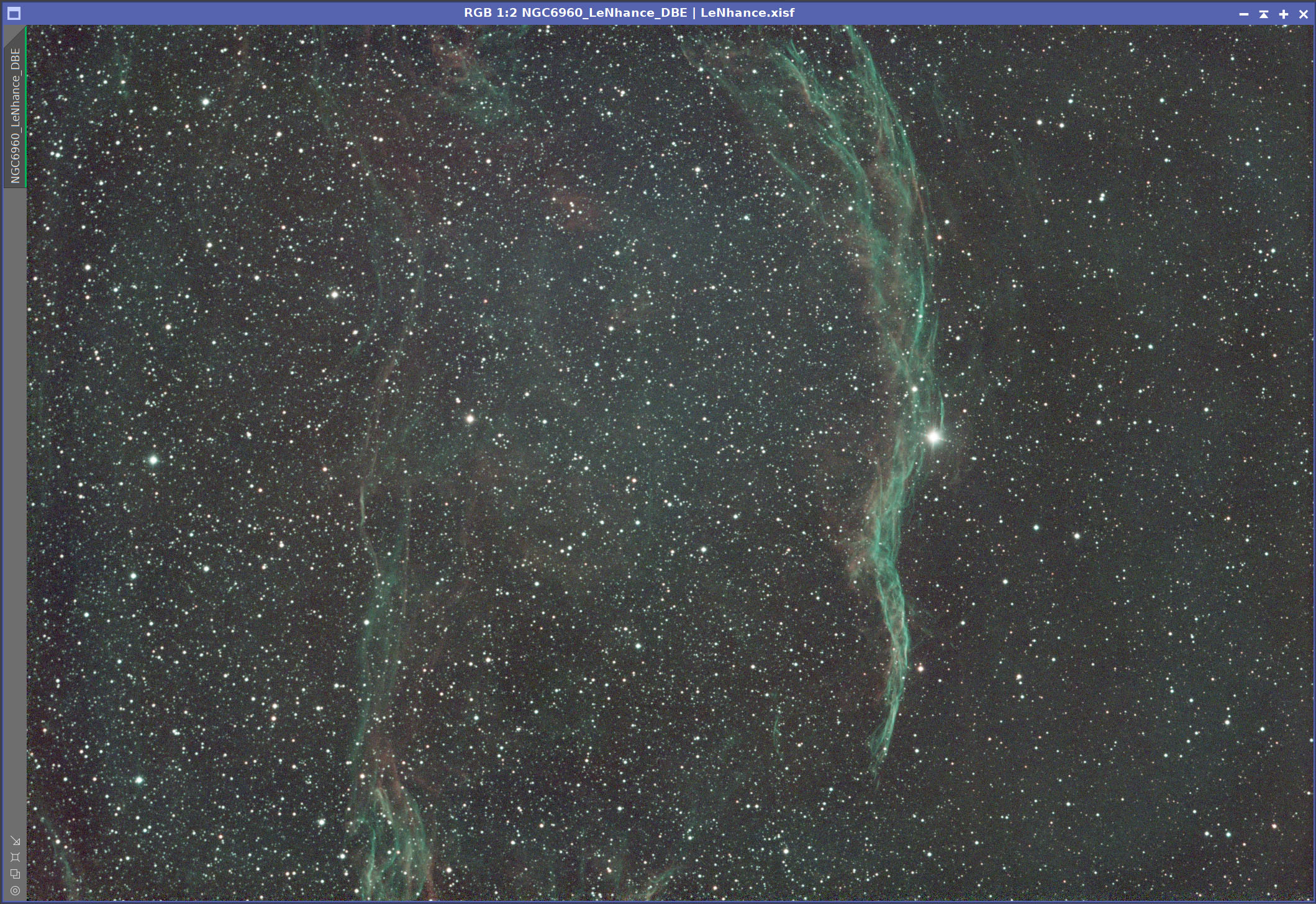 DynamicBackgroundExtraction helped to resolve most of the gradient issues, as shown above. I could spend more time further improving the background though.

I then used BackgroundNeutralization, ColorCalibration, and SCNR to correct the colors, followed by another auto-stretch (linked channels) to give this result: 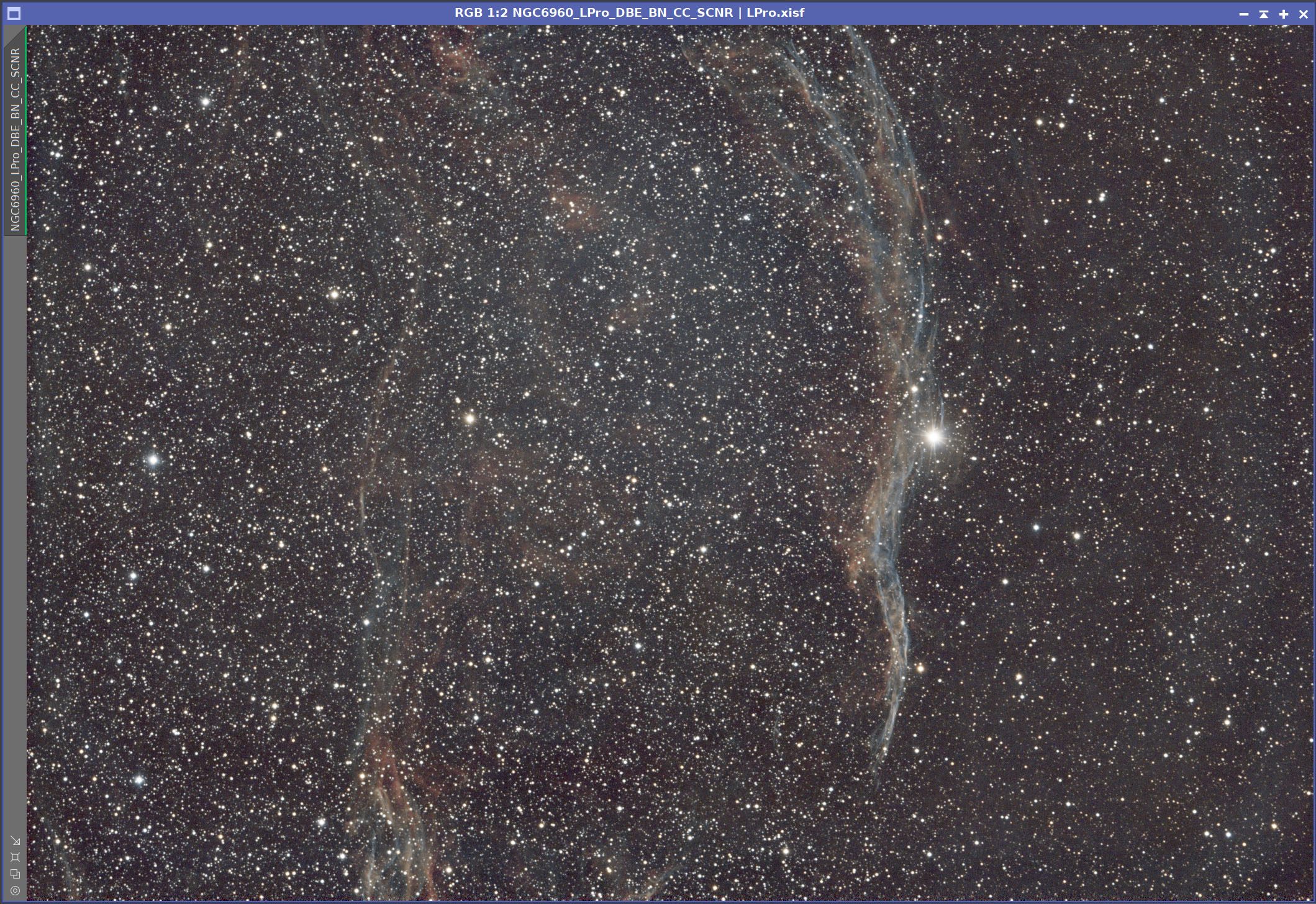 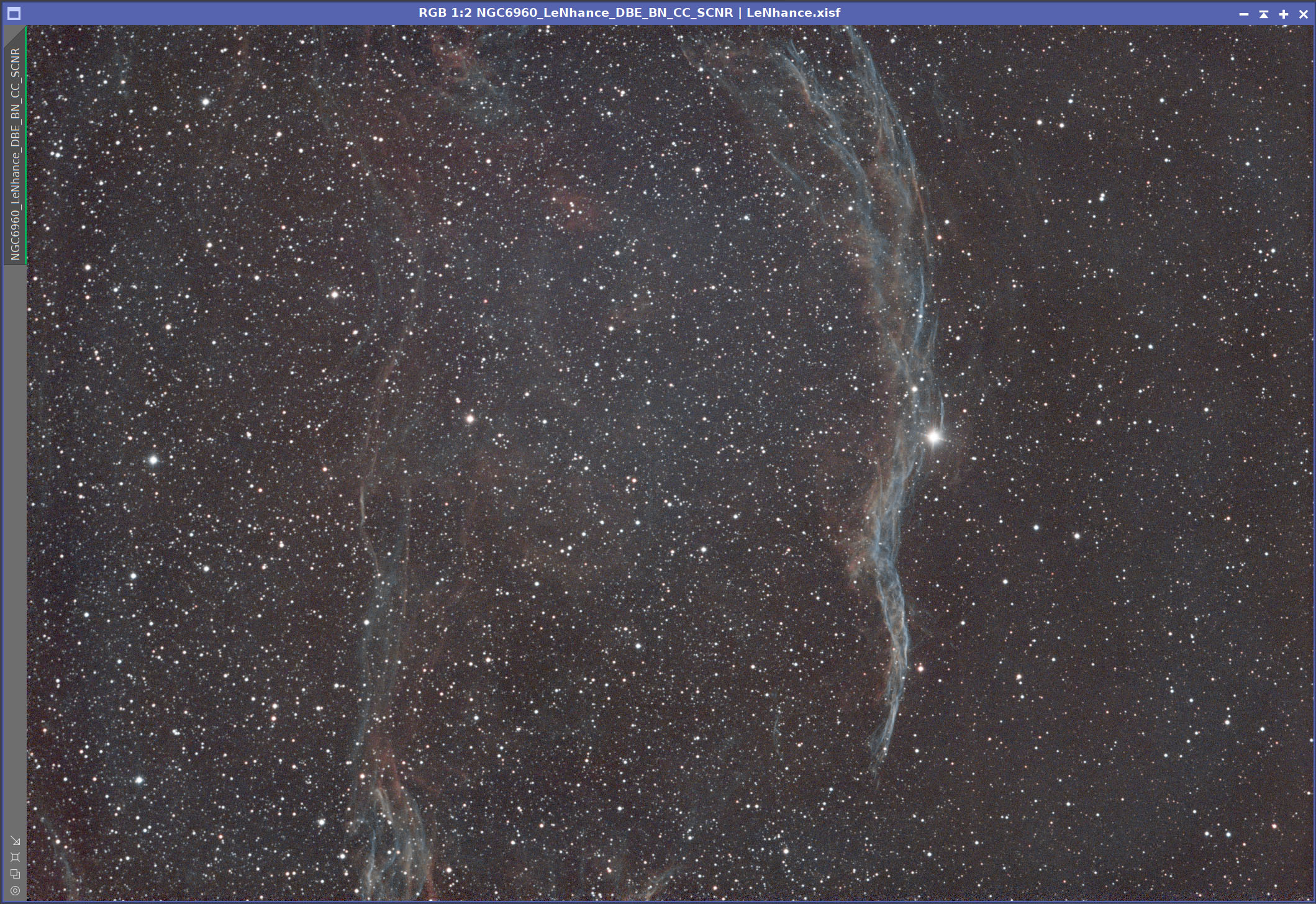 I do prefer the L-eNhance version, because of the smaller, less-bloated stars, and the greater nebulosity in the blue channel.

However, I’m not seeing much immediate difference in the red channel. Maybe I need to do longer exposures (or capture more frames) to benefit from more Hα nebulosity, but I was concerned about going longer than 60 seconds at f/2.2 due to the full moon, which I think already caused harsher gradients. Maybe the filter would perform better during a full moon if the OIII band was narrower.

I further edited the L-eNhance version of the Western Veil Nebula in PixInsight to come up with this final edit:

What do you think of the above results? Do let me know in the comments section below. I intend to update this review in a couple of weeks when the moon isn’t so illuminated, to see how differently the filter performs.

While I had my scope setup, I captured some data of the Pelican Nebula. Here is the processed image, consisting of 50 minutes of data:

And I also pointed towards part of the North America Nebula. Here is the processed image, consisting of 50 minutes of data:

All edits were done using PixInsight, with some final tweaks performed in Lightroom.

The filter appears to work well, but admittedly I don’t often image during a full moon, so I don’t have much to compare it to at the moment. I’ll be testing the same targets again in a couple of weeks when the sky is darker to see how the results differ.

Some benefits I see of using the L-eNhance filter: